What you need to know about Stellar Evolution?

05 Nov What you need to know about Stellar Evolution?

Posted at 12:39h in Physics and Maths Study Tips by admin 0 Comments
0 Likes 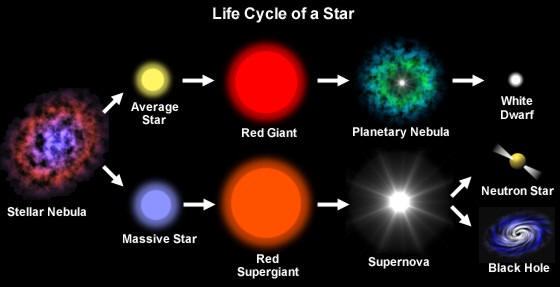 Stars form from enormous clouds of hydrogen atoms, pulled together by the force of gravity.  As the cloud collapses, gravitational potential energy is converted to kinetic energy of the atoms (they are all “falling” toward their common center of mass).  If a cloud has enough mass, the pull of gravity will eventually compress these atoms into a tiny enough space that collisions between the fast moving atoms will lead to nuclear fusion.

You can play with simulation of the formation of a solar system here:

Once fusion begins, hydrogen will be converted to helium in a three step process that ultimately forms one He from 4 H atoms, releasing lots of energy in the form of gamma rays, along with some neutrinos and some positrons.

The energy that is released streams outward and heats the outer layers of the star so that they glow and give off the visible light that we can see.  The outward flow of energy also exerts some pressure to counter the inward pull of gravity.  Stars exist in a fine balance between the inward pull of gravity and the outward radiation pressure.  If the radiation pressure is larger than the gravitational pull, the star will expand and fusion will slow down, and if the gravitational pressure is larger then the star will compress and fusion will accelerate, so the star can find a stable equilibrium.

Most of main sequence stars are so small that they are called red dwarfs, and most of those will simply live out their lives by fusing H into He until they eventually run out of fuel and become white dwarfs.  These small stars use up their fuel so slowly that very few if any have had time to become white dwarfs yet, since the universe isn’t old enough.

Main sequence stars whose mass is at least 1/4 that of our sun will eventually pass through a red giant phase.  That phase will start when the star has used up about 12% of its hydrogen  You can learn about that process by watching this Khan Academy video:

Becoming a Red Giant or Supergiant

Red giants fuse elements heavier than H.  Relatively small ones will only be able to produce He.  Larger giants will fuse He into C, O, and similarly massive atoms.  Supergiants are large enough to fuse even those elements into heavier elements, up to Fe.  Fe is the most massive atom that can be formed from fusion inside a star because Fe is at the peak of the nuclear binding energy curve (see Atomic Physics to learn why Fe and Ni are the most stable of all the atomic nuclei).

Khan has a video about the evolution of massive stars here:

The star’s mass will determine its fate after it goes through the giant or supergiant phase.  The relatively small ones will become white dwarfs once they run out of fuel.  They will spend the rest of eternity cooling off.  The white dwarf is very dense and hot even though fusion is no longer taking place in its core.

Without fusion, there is no radiation pressure outward, so what is keeping the white dwarf from collapsing?  The answer is “electron degeneracy pressure”.  The laws of quantum mechanics do not permit electrons to be pushed too close together.  Their resistance to further compression creates its own pressure outward, so the star withstands the crushing force of gravity.

Stars whose core (not initial mass) have mass greater than 1.4x the sun are too big to become white dwarfs.  This limit is called the Chandrasekhar limit.  Stars that surpass the limit are destined to become neutron stars or black holes.  But first they will undergo a…

The supernova explosion will shine briefly as bright as an entire galaxy.

Khan has a good video about supernovas, here:

I also like this video by PhysicsGirl which helps illustrate how the supernova produces such a dramatic expulsion of the outer layers of the star’s mass, at up to 1/10th the speed of light:

After the supernova, if the star has a core mass greater than the Oppenheimer-Volkoff limit (around 2 or 3 masses of our sun), the star will become a black hole.  If not, it will become a neutron star.  In a neutron star, the pressure of gravity becomes so great that the electrons, which won’t go closer together because of degeneracy, instead MERGE with protons to form neutrons.  The neutrons then behave like the electrons do in a white dwarf – they refuse to be packed too tightly together, and this neutron degeneracy pressure is what stops gravity from crushing the star any further.  Now we have an incredibly dense star made up entirely of neutrons.  A star larger than the sun now is about the size of Manhattan!

If the star’s mass is large enough, even neutron degeneracy is not enough to stop the collapse, and the star becomes a black hole, virtually disappearing from our universe, detectable only by the gravitational effects it has on the universe around it.

Khan has a video about black holes here: