What do you need to know about Quantum Physics?

20 Aug What do you need to know about Quantum Physics?

Posted at 16:13h in Physics and Maths Study Tips by admin 0 Comments
0 Likes

The sequence of development of quantum mechanics, summed up for IB students, from me:

(1) Hydrogen atoms emit a discrete spectrum of light.  This is our first evidence that energy levels in the atom are quantized.  What a mystery!  Physicists have never seen something like this before.

(2) Balmer comes up with a crazy formula that predicts the wavelengths that come out from hydrogen.  He doesn’t know why it works, it just does.  It is a discrete formula that involves the term n^2.  Why would n^2 be in there?

(3) Einstein in 1905 explains the photoelectric effect by treating light as a particle rather than a wave, overturning 200 years of belief about the nature of light.  His conclusion is particularly surprising in light of Young’s experiment and Maxwell’s equations, which both provide strong support for the idea that light is a wave.   Light refracts, it diffracts, and it can be polarized.  These are all characteristics of waves, not particles. Millikan attempts to disprove Einstein’s particle idea, but instead he confirms Einstein’s predictions with his stopping voltage experiments.  Light is a particle, at least sometimes.  This discovery makes Einstein the father of quantum mechanics, among other things.

(4) Bohr comes up with a quantized model of the atom, in which the electrons orbit at particular radii, but never in between those radii.  He does not know exactly what makes these particular orbits special, but his model explains the discrete emission spectrum, and it fits the Balmer series (by assuming that the angular momentum of the electrons must be quantized).  But why is this quantization happening?

(5) DeBroglie suggests that if waves can be particles, particles can also be waves.  Davisson and Germer confirm by experiment that electrons can be diffracted.

(6) Schrodinger says that the electron in an atom acts not as a particle but as a standing wave.  Bohr’s model, which provided so much insight into the discreteness of energy levels in the atom, turns out to be wrong.  The electrons are not particles in orbit, they are standing waves.  Finally we have an understanding of how discreteness has crept into the atom.  Standing waves can only exist at integer multiples of half-wavelengths.  Furthermore, the energy of these standing waves will be proportional squares of integers.  This is where the n^2 term comes from in the Balmer series!

(7) Max Born sees that Schrodinger’s wave equation needs to be interpreted as a probability distribution.  Einstein hates this idea: God does not play dice!  Schrodinger hates the idea, too!  But there’s no way around it.  This is the end of deterministic physics!  There are some events that just can’t be predicted.  Physicists never thought this could be the case.  But it is.

(8) Heisenberg recognizes that unlike particles, waves do not have a specific location.  They are spread out, rather than local.  And they are continuous, rather than discrete.  This wave nature of all particles means that there are limits to what can be known about the location and velocity of a particle.  This is the Heisenberg Uncertainty Principle and it arises because particles act like waves.   It has nothing to do with insufficient technology to measure locations and positions.  This is the final death blow for certainty in physics.  The science, and our understanding of the universe, will never be the same.

My spreadsheet showing the calculation of wavelength using the Balmer formula:

Using classical physics and vectors, plus assumption that angular momentum of electron is quantized, to derive the equation for Bohr model radii.

Using equation for Bohr model radii to draw shell model for n=1 to 3, and calculating the velocity of a ground state electron.

Using classical physics to calculate the energy of electrons in Bohr model. Solving for energy of ground state and more generally for level n.

A simulator of the effect and of Millikan’s experimental setup to study it http://phet.colorado.edu/en/simulation/photoelectric

What happens in the photoelectric effect:

1) When you increase the intensity but keep the frequency the same, you get more electrons coming out, but the energy of those electrons does not change

3) Above the threshold frequency, the energy of emitted electrons increases linearly as the frequency increases, following Planck’s formula E = hf.

Key points IB students need to understand about how the Photoelectric Effect shows light to be a particle rather than a wave:

(1) The energy of a wave is proportional to amplitude squared.  This means more intense light should make electrons come out with more energy.  This does not happen.

(2) If light is a wave, why is there this special threshold frequency?  All frequencies of waves carry energy.  Why are some frequencies too low to make any electrons come out, no matter how intense the light is?

How does Einstein use the idea of photons to explain the photoelectric effect? 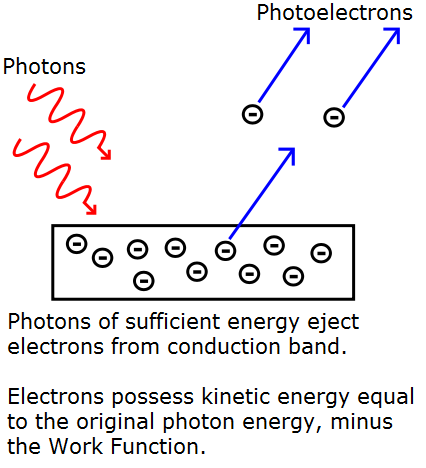 (a) Electrons are stuck in the metal like balls stuck inside a bucket.  It takes a certain amount of minimum energy (also called the “work function”) to get the electrons released from the surface of the metal.  If a photon doesn’t have at least that much energy, then no electrons will come out.  This explains the existence of the threshold frequency.

(c) Energy is conserved when the photon ejects the electron.  The electron uses up some energy to escape from the metal.  Whatever it has left over becomes kinetic energy of the electron.  Surface electrons are the easiest to knock looses, so they come out with the most energy.  Electrons that were deeper in the metal will come out with less energy, or not at all.  This explains why higher frequency results in electrons with higher kinetic energy.   The kinetic energy will be equal to the total energy, hf, minus the escape energy.  KE = hf – work function.

Veritasium video about the original experiment

Veritasium does the double slit with SINGLE PHOTONS

Richard Feynman talks about a thought experiment using electrons. He says this is THE central paradox of Quantum Physics. Here’s the text of his lecture:  http://www.feynmanlectures.caltech.edu/III_01.html

Veritasium demonstration of uncertainty principle with a laser

A musical version of the uncertainty principle: http://newt.phys.unsw.edu.au/jw/uncertainty.html

Quantum Mechanics seems ridiculous!  How can it be right?

Yale lecture about the key experimental results from quantum mechanics

Physicist Brian Greene explains why Einstein hated his “quantum mechanics” child (and he gives you a taste of general relativity, too!)