What do you need to know about Oscillations and Waves?

12 Aug What do you need to know about Oscillations and Waves?

Posted at 10:38h in Physics and Maths Study Tips by admin 0 Comments
0 Likes

Thermal physics provided the transition from macroscopic physics to microscopic physics, and electricity is all about electrons, so why are we backtracking now to talk about bouncing springs and wiggling strings?

It’s because waves are going to be essential, ultimately, to our understanding of the inner workings of the atom. Bohr’s earliest thoughts about the atom involved viewing electrons as little mass/spring systems – “harmonic oscillators” – inside the atom. Later he would switch to a model in which the electrons orbit the nucleus.  Orbits are circular motion, and circular motion is intimately related to simple harmonic motion.  It all ties together! 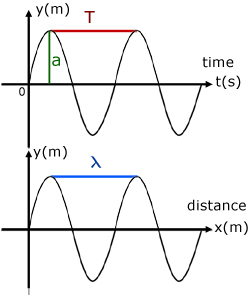 Did you ever wonder why pi shows up in so many places where you might not expect it? One reason is that simple harmonic motion is related to circular motion.  Pi is not just about circles, it’s about oscillations, and oscillations are everywhere, so pi is everywhere.

This simulation can help you visualize wavefronts: http://phet.colorado.edu/en/simulation/wave-interference

b) Longitudinal waves in pipes